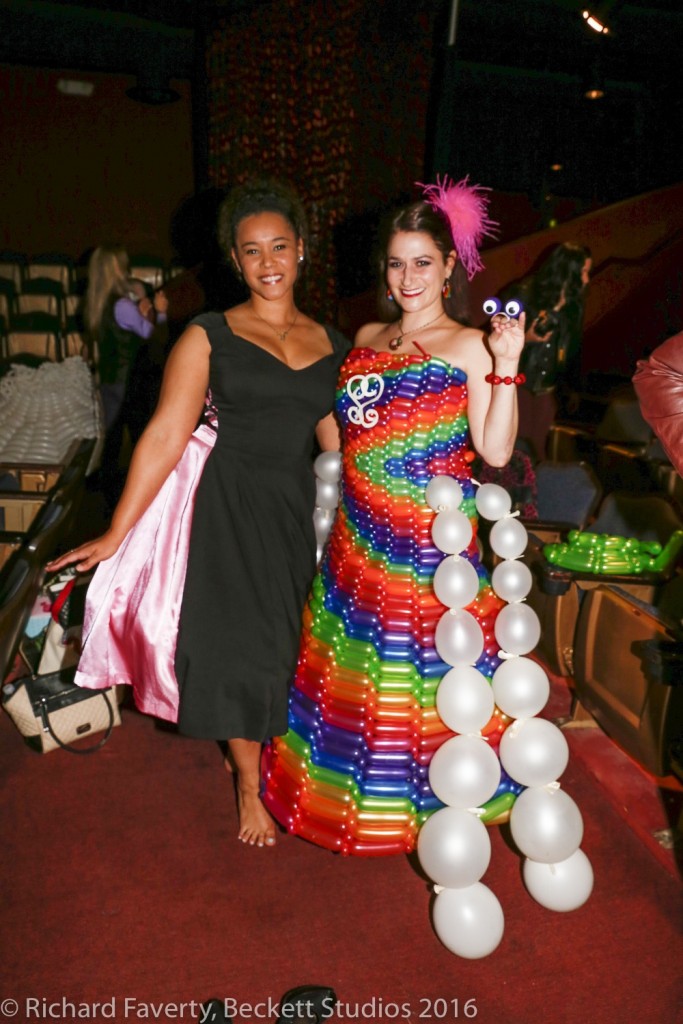 Shenanigans was put on in Las Vegas by Penny Wiggins (former assistant to The Amazing Jonathan, who also performed at the event) in collaboration with the Las Vegas Entertainment Community. It was set up to help cover the large costs of Penny’s much needed knee surgery and subsequent knee rehabilitation. The event was hosted at Baobab Stage (Las Vegas, Nevada) and included some of the best performers (both local and international), so naturally, I was incredibly excited not only to take part in the event, but also to experience some of the amazing performances by artists such as Anthony Rais, Troy Tinker, Bizzaro, and many others!
My contributions to the event included three balloon dresses in different styles; they were all designed to follow a rainbow theme which was incorporated differently into each of them. The dresses were worn by Julie Trygar, Jamie Diaz and Emily Lauren, who all did a fantastic job of modeling the balloon dresses and making them really come to life! 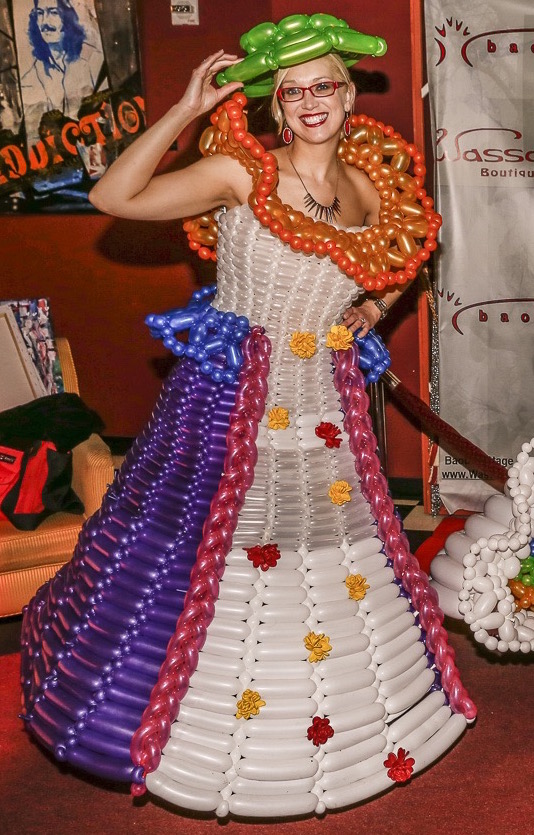 True to the style of traditional empire dresses, this balloon creation was designed to have a short, fitted bodice and a long, loose-fitting skirt. The main color in this dress was white – the rainbow theme was incorporated into the sides of the dress, as well as into the intricate Bertha collar and hat. The green hat went particularly well with the model’s (Julie Trygar) blonde hair, as well as with the yellow and red flowers that were added to the main body of the dress. 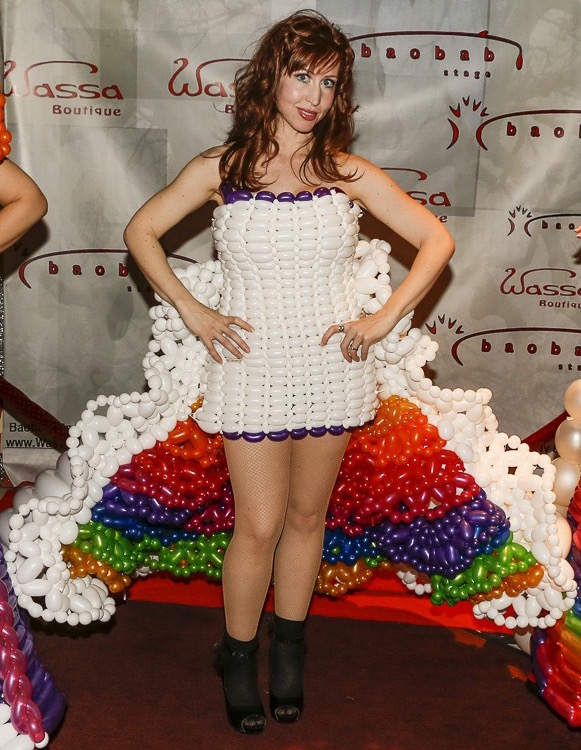 Bodycon dresses are typically short and figure hugging – this strapless balloon dress was no exception! Despite being made entirely from balloons, the main body of the dress (made from white balloons and lined with purple ones) accentuated the model’s (Jamie Diaz) figure, giving it an elegant, yet fun look. The rainbow theme could be seen in the cape attached to the skirt of the dress where the colors were able to really stand out within the cape’s white frame. 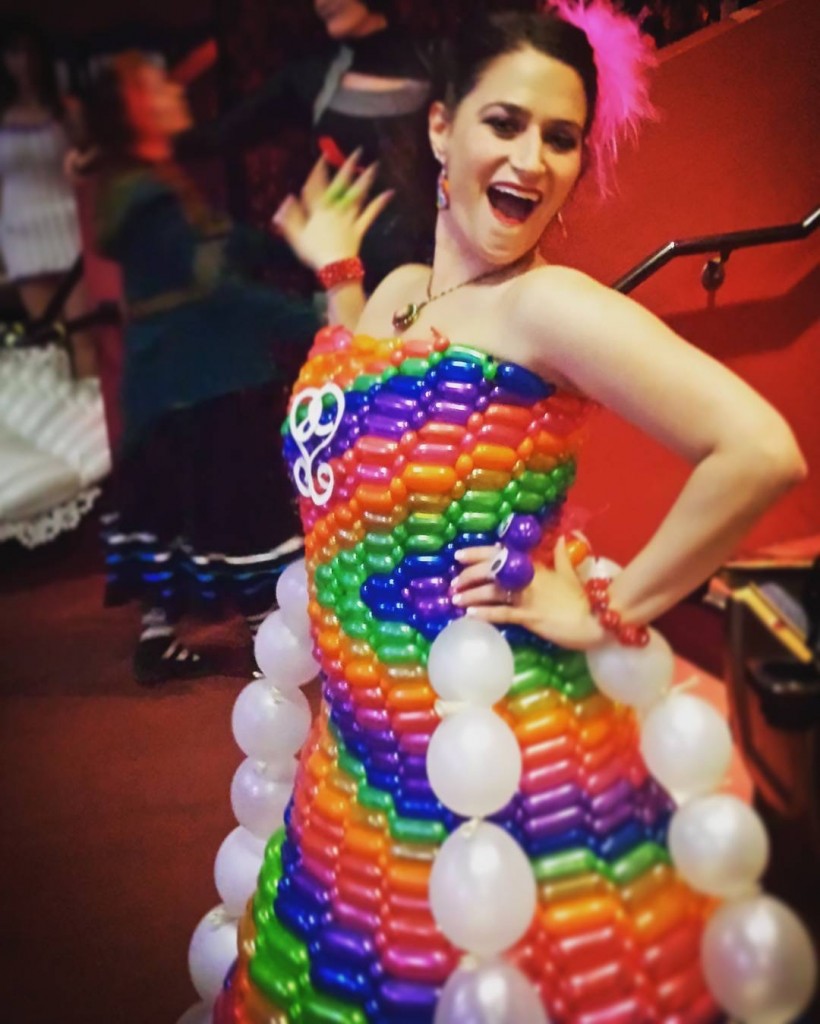 The ball gown silhouette is always reminiscent of a princess from a far away land in a classic fairy tale. The fitted bodice and the full, regal bell-shape of the skirt is a universally flattering look; perhaps even more so when the dress is made solely from balloons! This dress was was filled entirely with balloons in a rainbow pattern, and was accentuated with two white balloon accessories on each side, giving the model (Emily Lauren) the appearance of a stunning princess from a whimsical land! 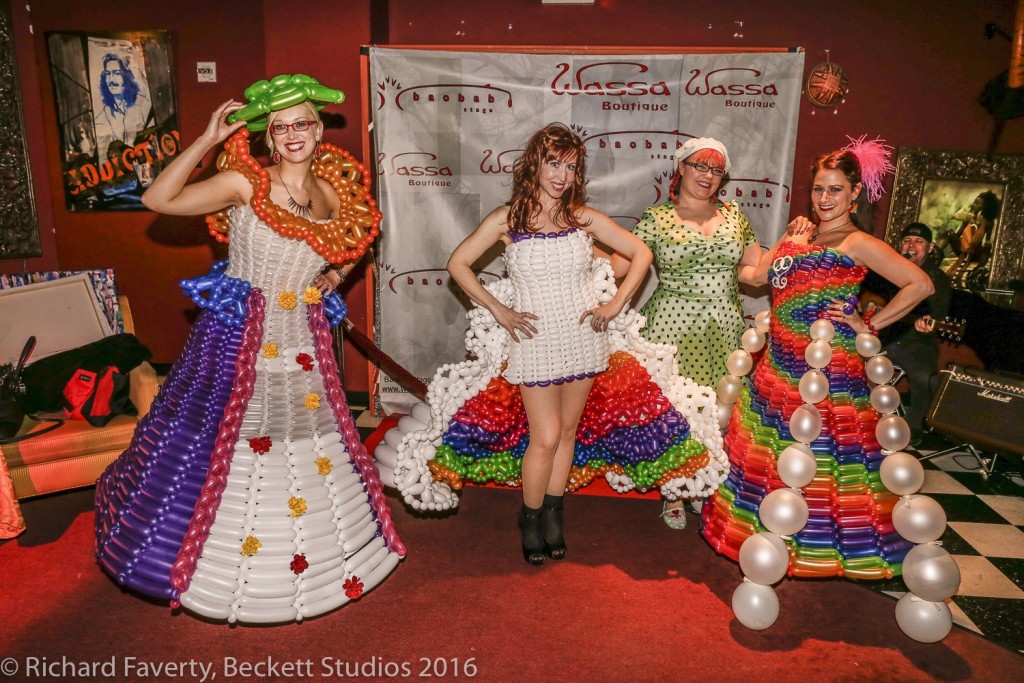 It was wonderful to see the Las Vegas Entertainment Community come together and show so much love and support for one of their own! With so many fabulous performances and with such an amazing crowd, it was no wonder that the event managed to raise the funds necessary and that Penny Wiggins was finally able to get the surgery she needed! The night was not only a huge success, but was also an amazingly entertaining event full of fun, good humor and laughter!