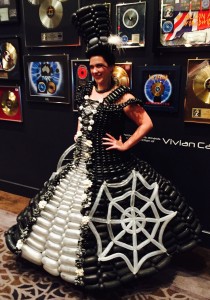 The AFAN (Aid For AIDS of Nevada) Black And White Party has been an annual AFAN event ever since 1987. Having designed balloon dresses for this event six times prior to this year, I have to say, I was just as excited to participate in this year’s party as ever! The event brought together two of the things that I feel most passionately about in my life – it gave me a platform to design and create balloon fashion and participate in a fundraiser for a good cause!

AFAN is one of the largest and oldest AIDS service organizations in Nevada. It provides everything from food programs to direct client service programs, supporting both children and adults affected by HIV/AIDS and focusing on improving their quality of life. The Black & White Party tradition began as a simple celebration hosted by AFAN founders Bill Oldfield and Darryl Thomas that was set up to bring attention to and spread awareness of the AIDS virus. The party also serves as a show of support for the people affected by the virus and aims to eliminate the stigma associated with it. The event proved to be so successful, that it turned into an annual fundraising party that attracts thousands of people each year! 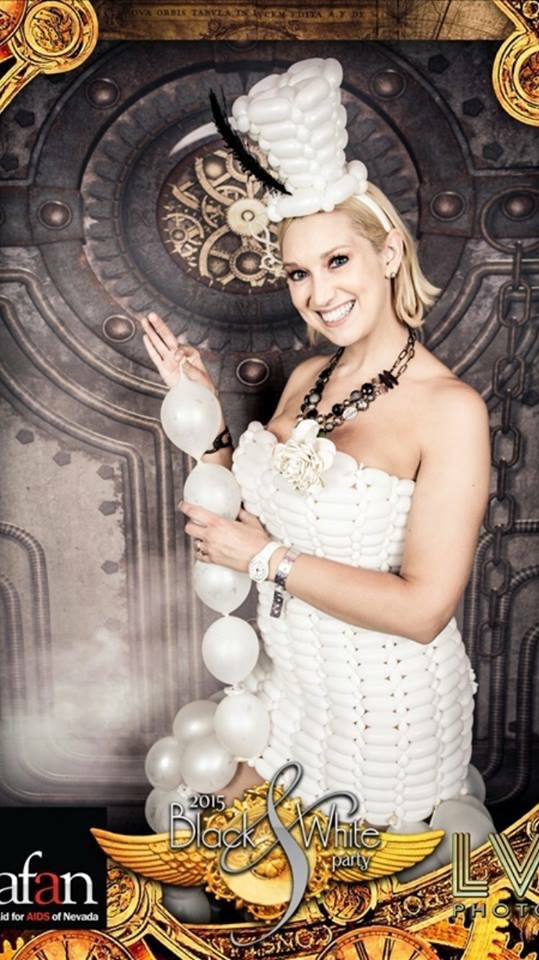 Model Julie Trygar takes a moment to show of her balloon dress.

The black and white theme of the event was derived from the black and white food items that were so popular in grocery stores at the time. In keeping with the theme, I decided it would be appropriate to create two balloon dresses, one black and one white. I used around 200 balloons to create the white dress. The four hours I spent working on it were totally worth it when I saw the full effects of the dress in the club! Because the bottom of the dress contained several lights, it lit up beautifully in the dark club – it definitely drew the attention of everyone around it! I thought of the dress as a metaphor for the event, it was a fun, entertaining, whimsical outfit that drew attention to a very serious and real social issue – just like the night was designed to be both fun and beneficial to the community! 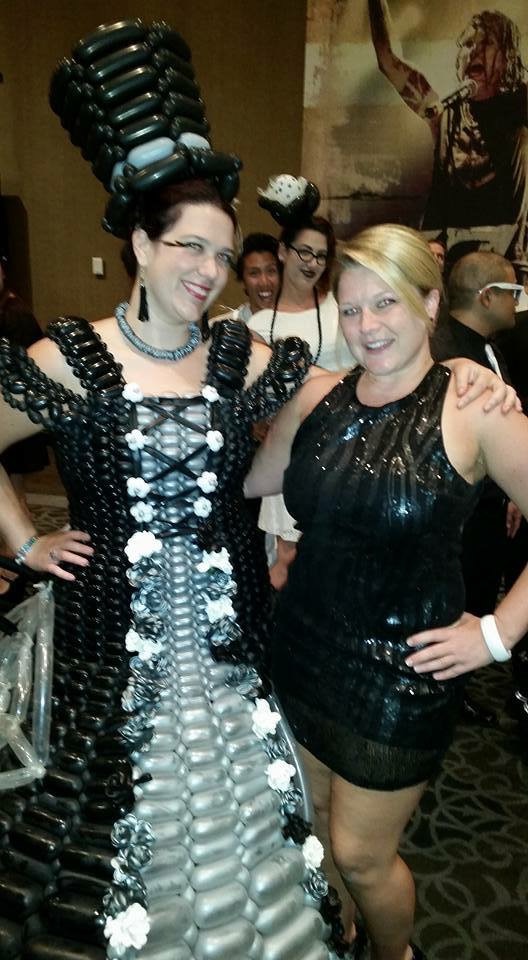 The black balloon dress was considerably more elaborate; it consisted of over 700 balloons and fifteen hours to complete. One of the reasons it took more time than the white dress was because of the intricate spider-web design that it featured, as well as the forty balloon flowers (made with non-inflated balloons) that were carefully added to the dress. Watching the balloon dress move was as interesting to me as it was for the rest of the guests! The many unique ways that a balloon dress and the dress wearer compliment each other is always an amusing spectacle!

Having designed balloon fashion for a wide range of different events, ranging from charity events and children’s parties to corporate events and night club parties, I have to say, even though each event is truly unique and different in its purpose and atmosphere, each and every one of them can be greatly enhanced with the addition of balloon dresses and costumes – the AFAN GB&WP was no exception! I feel incredibly lucky to have been able to create balloon fashion for this fundraiser that was not only a great experience for all the guests but also raised awareness of such an important issue!